Clarification with the Rölli company 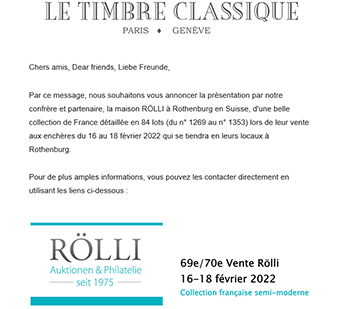 (Swiss Philatelic Journal, May 2022) : Some readers received an emailing from Rölli Auktionen AG dated April 7, 2022 mentioning Le Timbre Classique SA. Le Timbre Classique SA (LTC) would like to provide some clarification on this subject. On January 17, 2022, Mrs. Christina Rölli signed a contract with LTC providing the latter with the contacts of Rölli Auktionen AG’s customers. This in return for several services from LTC, including a promotional emailing that LTC did for Rölli Auktionen AG on January 25, 2022 (see above). This in order to inform the large clientele of collectors of France of Le Timbre Classique about the section of France in the Rölli auction of February 16 to 18, 2022 (article 7 of the contract). Regarding the information received from the Rölli company, LTC would like to mention in particular four articles of the contract of January 17, 2022:

Article 2: “The Rölli company undertakes not to sell its customer file to any other entity or person. “

Article 4: “LTC undertakes not to resell this file to any other entity or person. “

Article 5: “LTC will be authorized to use this file for marketing and prospecting purposes. “

Article 6: “LTC will be authorized to disclose the source of this file as coming from the Rölli company. “

Subsequently, an amendment to the first contract was signed on February 15, 2022 between LTC and Mrs. Christina Rölli allowing the latter to once again dispose of the client file, rendering article 2 of the first contract obsolete.

Ethically, it was important for LTC to mention in its Emailing dated April 4, 2022 the source of the new contacts entrusted to it.

LTC has rigorously respected the terms of the contract binding it to Mrs. Christina Rölli. It is also clear that at no time did LTC claim, assume or imply that it had taken over Rölli Auktionen AG.

To serve you in the best way, our website uses cookies to remember your preferences and in particular to improve your repeat visits. By clicking "Accept all", you consent to the use of all cookies. However, you can also click on "Cookie settings" to manage the subject of your consent more precisely.
SettingsAccept all
Manage consent

This website uses cookies to improve your experience while you navigate through the website. Out of these, the cookies that are categorized as necessary are stored on your browser as they are essential for the working of basic functionalities of the website. We also use third-party cookies that help us analyze and understand how you use this website. These cookies will be stored in your browser only with your consent. You also have the option to opt-out of these cookies. But opting out of some of these cookies may affect your browsing experience.
Necessary Always Enabled
Necessary cookies are absolutely essential for the website to function properly. These cookies ensure basic functionalities and security features of the website, anonymously.
Functional
Functional cookies help to perform certain functionalities like sharing the content of the website on social media platforms, collect feedbacks, and other third-party features.
Performance
Performance cookies are used to understand and analyze the key performance indexes of the website which helps in delivering a better user experience for the visitors.
Others
Other uncategorized cookies are those that are being analyzed and have not been classified into a category as yet.
SAVE & ACCEPT